A world where the living and the undead are entangled in

a never ending battle for survival.

New Springfield
We have pushed back every siege.
We have laid waste to every horde.
We will protect you.

Despite the unpredictable attacks of the terrorists calling themselves G.I.Joe, New Springfield and it's surrounding communities are safe.
All are welcome.

Sanctuary for any that make it to its walls.

Haven from the never ending onslaught of the undead.

Home to the remains of the government of the former United States of America.
Command Center for Cobra!

The G.I.Joe team have been identified as traitors and terrorists. The last remnants of the United States Government now work in conjunction with Cobra. A bounty has been placed on the team and a Cobra Strike Team has been organized to hunt and eliminate the threat posed by G.I.Joe.

As you know, the United States is no more. The world is in shambles. Life as we know it has ceased to exist.

Nuclear Winter has wreaked havoc across large swathes of the Earth creating barren wastelands inhabited by fierce marauders and THEM. The coasts, once vital arteries to economic success, have become battlegrounds for survival between competing forces and THEM. The seas, birthplace of life, have become fetid dumping grounds for the helpless masses who try to live upon the waves hoping to avoid pirates and THEM.

What follows among these pages are the stories of survival as gathered from sources around the world. They may not be in chronological order as we release them to you as we receive them. However, we have done our best to separate the narratives into the following categories; those related to the once mighty now defunct G.I. Joe team, those related to the Cobra organization, those relating to the Laird of Scotland, and those that are miscellaneous. If the need arises we will add new categories.

We have also tried to release dossiers on the key players left around the world, complied with your assistance. If you feel we are missing any key players please update that subject's file.

With our limited resources and the failing infrastructure we are unable to fact check each claim within these tales. We leave it to you the reader to decide; what to believe, what to hope for, what to use to your advantage, and what to fear.

All That Remains is the scattered remnants of days past and THEM.

First off a HUGE thanks to Daremo for holding this contest and to Joecustoms for hosting it. It was an amazing experience; from the coming up with the idea to the daily anticipation of rounds.

We are proud to announce that yes Honey Badger is the KUMITE CHAMPION.

When trying to reach her for comment her manager simply said, "Honey Badger don't give a shit. I however think it's great that she finally received the recognition she deserves for being so amazingly bad ass. I mean she killed Snake Eyes and made Storm Shadow crap himself."

Our hats off to you Honey Badger where ever you are. (Most likely killing shit and eating it).

Thanks again to Daremo and Joecustoms.

Check out the great work done by Bleach'd Out Grafx. Amazing one of a kind T shirts custom made to order. Each hand painted with BLEACH 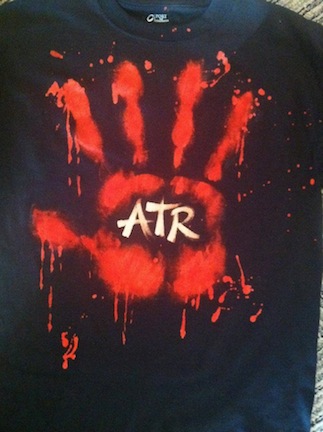 Thanks to all who entered. Your creativity is inspiring. I'm hoping that many of you will continue to contribute and help expand the ATR world.

This was a tough decision, a lot tougher than was expected. All the entries were excellent. Judging was based on: A) Creativity of figure B) Creativity of story C) Presentation.

That in mind here are your winners:

All winners please PM me with your address.

Chapter 98: The Minstrel
by SGCaper | 0 comments

Crotalus
by SGCaper 4 months ago

Boomslang Division: by BRUCE FEJERAN CHARGUALAF
by SGCaper 4 months ago

Stalker: By DAN BEAULIEU
by SGCaper 4 months ago

Nephilim: By JOSE SOLA
by SGCaper 4 months ago
More...